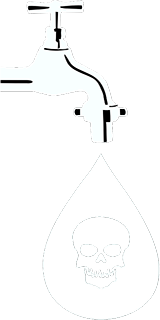 Water intoxication, also known as water poisoning or dilutional hyponatremia, is a potentially fatal disturbance in brain functions that results when the normal balance of electrolytes in the body is pushed outside safe limits by overhydration.

Under normal circumstances, accidentally consuming too much water is exceptionally rare. Nearly all deaths related to water intoxication in normal individuals have resulted either from water drinking contests in which individuals attempt to consume large amounts of water, or from long bouts of exercise during which excessive amounts of fluid were consumed.[1] In addition, water cure, a method of torture in which the victim is forced to consume excessive amounts of water, can cause water intoxication.

Water, just like any other substance, can be considered a poison when over-consumed in a specific period of time. Water intoxication mostly occurs when water is being consumed in a high quantity without giving the body the proper nutrients it needs to be healthy, but even healthy people can get water intoxication.[2]

Excess of body water may also be a result of a medical condition or improper treatment; see “hyponatremia” for some examples. Water is considered the least toxic chemical compound, with an LD50 of over 90 ml/kg in rats.[3]


Side Effects:
The hyponatremia resulting in rapid development of a brain edema with headache, nausea, tremors and seizures.
With slow development over more than two daytime sleepiness, confusion, loss of appetite and change in personality are in the foreground.


Means:
* Water. You can also use destilled water. In 2007, a California woman died after drinking 6 liters in 3 hours.
Destilled water is NOT “toxic” (urban legend). You could drink it regularly. But it could accelerates the effect.
* Empty stomach for best result (no electrolytes through the food).
* Perhaps Sleeping pills and high fatigue (because of the unpleasant side effects).
* Maybe a Suicide Note.  You could bequeath the suicide letter to another person.
That person could send it to this website.
* Mention this website is welcome.


Procedure:
1. Place a written suicide note, gladly with a reference to this website visible in the cell.
2. Swallow a sufficient amount of water.